The Rich Heritage of Ralph Lauren

Ralph Lauren is an aspirational lifestyle brand that makes clothing for men, women and children, as well as home furnishings, accessories and fragrances. It is based on an aristocratic English style that has been adapted for America’s sporty elite. The success of the brand has earned its founder Ralph Lauren a personal fortune of more than $6 billion, making him among the 200 richest people in the world.

We cannot display this gallery

Ralph Lauren was born Ralph Rueben Lifshitz in New York City in 1939. He was one of four children of Frieda and Frank Lifshitz, Jewish immigrants who had fled Belarus. His father was an artist who painted houses for a living. His mother was a homemaker.

Ralph and his siblings grew up in the Bronx, New York. Due to his very unusual last name, he and his brother were constantly teased at school. As a result, when they were teenagers, they decided to change their last name to “Lauren.” Ralph grew up playing basketball and baseball and as a young man, he was well known for his fashion sense. He would splurge all his pocket money on luxurious suits and accessories. He made ties from scraps of fabric and sold them to his friends. To escape from his mundane life, he would immerse himself in movies. There he was inspired by screen icons Fred Astaire and Cary Grant and he developed a taste for preppy and vintage looks. In his 1957 high school yearbook, he wrote “millionaire” as one of his life goals. After high school, he briefly studied business at Baruch College in Manhattan and even had a two year stint in the Army before taking a sales job at Brooks Brothers.

“We don’t only sell clothes, we are selling a dream and a vision.”
–Ralph Lauren

On December 20, 1964, he married Ricky Ann Low-Beer in New York City. The two had met six months earlier, in a doctor’s office where Ricky was working as a receptionist. She became his muse and his source of inspiration. He once said that she was “the all-American girl. The one in jeans and a white shirt with rolled-up sleeves, driving a convertible”. The iconic Ricky handbag is named after her and has been wildly successful, appearing in many incarnations and carried on the arms of celebrities such as Jessica Alba and Christie Brinkley.

At 28 years old, Ralph Lauren worked for the tie manufacturer Beau Brummell, where he convinced the company’s president to let him start his own line. One pivotal event – a friend taking him to his first polo match – made him fall in love with the distinctive fashion of this elite sport, and subsequently shaped his future. The polo match inspired him to start developing a high-class, elegant brand, which would eventually become Polo Ralph Lauren.

In 1967, he began designing neckties under his new label and selling them in department stores such as Bloomingdales. He took a risk and designed wide, colourful neckties at a time when narrow and plain ties were the norm. His risk paid off and he sold $500,000 worth of ties in one year. After this initial success, he was able to develop his business further to include a full menswear line.

In 1970, he received the Coty Award for his men’s designs and shortly thereafter, he released a line of women’s suits tailored in classic men’s style. In 1972, he designed a short-sleeved cotton mesh shirt in an assortment of colours. The shirt, embroidered with a Polo player (the most elegant of athletes!) has since become the symbol of the Ralph Lauren Polo brand. The tag line for the ad campaign was: “Every team has its color — Polo has seventeen”.

During the 1970s, Ralph Lauren became even more well known as a classic American designer when he created the wardrobe for 1974’s adaptation of The Great Gatsby, starring Robert Redford and Mia Farrow. He also created the distinctive looks for Diane Keaton and Woody Allen in the 1977 comedy Annie Hall.

The first Ralph Lauren fragrances were launched at Bloomingdales in March 1978. Lauren, a fragrance for women and Polo, a cologne for men, were launched together. This was a first for a designer: to launch both a men’s and a women’s scent simultaneously. The Polo scent was hugely popular and has undergone many versions over the years, including Polo Black, Polo Blue, The Big Pony Fragrance Collection for Women and most recently, Polo Red. Other scents followed and today, the fragrance portfolio includes Ralph for Women, and the bestselling Ralph Lauren Romance.

The Ralph Lauren brand expanded quickly throughout the 1980s and 1990s branching into home décor, children’s clothing and men’s and women’s accessories. Boutiques opened around the world — from Beverly Hills to Paris.

In 1984, Ralph Lauren established his first flagship store, ‘Polo Ralph Lauren’ by converting the historic Rhinelander Mansion into his store.

As a designer, Ralph Lauren has had the enviable job of creating uniforms for the US Olympic team. He’s held this prestigious contract from 2008 and through 2020.

In addition to clothing, accessories and fragrances, Ralph Lauren opened three restaurants: RL Restaurant in Chicago, Ralph’s in Paris and the Polo Bar in New York — further supporting the aspirational lifestyle his brand is known for.

In early 1987, Ralph Lauren was diagnosed with a benign brain tumor. In April 1987 he underwent surgery to remove the tumor and made a full recovery. He has since funded a number of initiatives related to cancer research and care, and in 1989 co-founded Georgetown University’s Nina Hyde Center for Breast Cancer Research.

“Style is very personal. It has nothing to do with fashion. Fashion is over quickly. Style is forever.”
—Ralph Lauren

Most recently, Ralph Lauren became enchanted by the show Downton Abbey. It matched the classic aesthetic he loves, and as a result, he created a fall collection inspired by the show. He also sponsored its final season in 2016.

Ralph Lauren is well-known as a collector of automobiles, with over 70 cars, some being extremely rare. In 2005 his collection was displayed at Boston’s Museum of Fine Arts. Seventeen cars from his collection were exhibited at the Musée des Arts Décoratifs, Paris in 2011.

Currently Ralph Lauren and his beloved wife Ricky divide their time between their homes in The Hamptons, New York and their ranch in Colorado. He has three children: Andrew, a film producer and actor; David, senior vice president at Ralph Lauren (also married to the former president of the US, George W Bush’s daughter Lauren); and Dylan, who runs Dylan’s Candy Bar in New York.

When asked how a Jewish kid from the Bronx could create Preppy clothes, he answered that it had nothing to do with class or money. It was all about dreams. In Ralph Lauren’s case it was, and continues to be, a true American Dream. 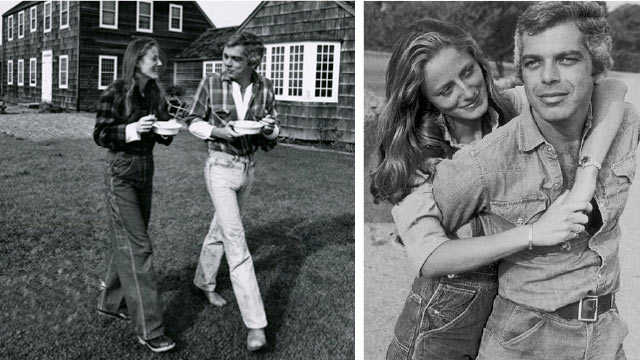 Ralph Lauren fragrances are available in Canada at Hudson’s Bay and thebay.com