Struggling with crow’s feet, laugh lines and skin aging around the eye area? You’re not alone. This is prime skincare concern of women around the world since the first signs of skin aging appear around the fragile eye area. Thankfully, Japanese scientists have tapped 20 years of research for a radical new approach. Following the success of last year’s Ultimune launch comes a version for the eye with some added new technology.

Universal concern: When beauty companies conduct global skincare studies with women of all ages and ethnicities, aging around the eye area always shows up in the top five concerns. It’s a problem that is of concern around the world.

First signs of aging: The signs of skin aging on the face first appear around the eyes with fine lines, wrinkles and dark circles. (This usually begins in your 20s) That is because the thickness of this skin is a mere 0.66 mm – less than one third the thickness of skin on other parts of the face.

Backstory: For more than 20 years, Shiseido skin scientists have conducted intense studies into how to boost skin’s own immunity levels. They hypothesized that if they could strengthen the skin’s overall health and immunity, they could slow the signs of skin aging and encourage more radiant skin. Rather than force or trigger cells to produce collagen like many traditional skincare products do, these researchers decided to take a holistic approach and see how supporting the overall health of the skin could slow the signs of aging. The results were so successful, the company immediately applied for global patents. What’s even more interesting, is by boosting the skin’s own immunity levels, they were able to get other skincare formulas to work more effectively – regardless the brand.

Ultimune: This research led to the debut of Ultimune in 2014, a serum that boosts overall skin healthy and immunity. It was a big success around the world. 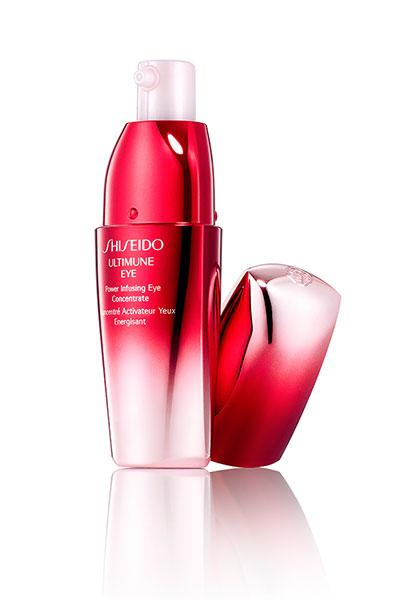 What is a power infusing concentrate: It’s a product that enhances the effects of existing eye care products that are subsequently used. Ultimune helps build a stronger eye area skin that is more receptive to other products. The products absorb quicker and deliver better results.

Exclusive complex A new ImuMoisture Complex restores the dramatically declined functions of the Langerhan cells and maintains moisture levels of skin even under harsh conditions.

Eye skin immunity: Researchers also discovered the skin around the eyes has its own immune system. When it is stressed, overly dry or damaged due to makeup application or removal, it shows the signs of skin aging.

Few sweat glands: The fragile skin around the eyes contains few sweat glands. Which means it is much more susceptible to dryness. When skin becomes dry and dehydrated, its barrier function weakens.

Key ingredients: rose and lotus to calm skin, gingko and thyme to reduce inflammation, and white birch extract to moisturize.

The fragile skin around the eye is always in a state of fatigue from blinking 20,000 times a day.”