Hubert de Givenchy is a French fashion designer whose name is synonymous with Parisian chic. He’s dressed some of the most iconic and influential women of the 20th Century. Grace Kelly, Elizabeth Taylor, Jackie Kennedy and Wallis Simpson all loved his modest and ladylike designs. He and his most famous muse Audrey Hepburn had a 40 year friendship that was as legendary as the elegant evening gowns, feminine hats and tailored suits that were his trademark.

Hubert James Taffin de Givenchy was born in 1927 to an aristocratic family in the French city of Beauvais. His family traced their nobility back to the 18th Century on his father’s side and his mother came from a long line of artists. His grandmother was a renowned tapestry maker and his great-great grandfather was a set designer for the Paris Opera.

When Hubert was three years old, his father tragically died of influenza, leaving him and his brother to be raised by their mother and grandmother.

His interest in fashion began when he was 10 and visited the fashion pavilion of an international exhibition in Paris.

“It was always my dream to be a dress designer.”
–Hubert de Givenchy

In 1944 at the age of 17, he moved to Paris to study art at the École Nationale Supérieure des Beaux-Arts. The 6’6” tall Givenchy cut an elegant figure and made an immediate impression on Paris. He briefly considered working in law, but decided instead to pursue a career in the world of fashion. The story goes that he showed up randomly at the offices of  Balenciaga with a portfolio in his hand, but they turned him down because he was too inexperienced. Instead, he began an apprenticeship with designer Jacques Fath. Later he worked for Lucien Lelong, and it was there that he met Lelong’s assistants Christian Dior and Pierre Balmain, who would soon be successful designers in their own right. He also did a stint with avant-garde designer Elsa Schiaparelli who allowed him to be in charge of the accessories department of her boutique. But even after exposure to many diverse styles, Givenchy would always be an admirer of the simplicity of Balenciaga. In later years, he made this simplicity part of his own design philosophy and became a friend of Cristobal Balenciaga. In time he was even mentored by him.

“Balenciaga is my religion. There’s Balenciaga, and the good Lord.”
–Hubert de Givenchy

In 1952, Givenchy opened his own design house, The House of Givenchy, literally across the street from his inspiration and fashion advisor, Balenciaga. At 25 years old, he was the youngest designer on the Paris fashion scene.

Due to low finances, Givenchy’s first collection was constructed entirely out of men’s white shirt material. It was traditionally a fabric only used for making prototype versions of garments. Even then, with the lack of color and texture, his first collection was a global success. The star item of the collection, an embroidered blouse, was named the “Bettina”, after Bettina Graziani, a top model at the time.

1957 was the year Givenchy launched one of his most innovative designs: the “sack” silhouette. Revolutionary for its time, the sack dress had no form or waistline, and instead disguised the female body beneath. Givenchy also experimented with higher hemlines and in doing so, he became a pioneer of fashion’s most radical decade: the sixties.

Givenchy’s historic meeting with Audrey Hepburn was a story worthy of a movie screenplay. He had been told that “Miss Hepburn” would be coming to see him about wardrobe for an upcoming film. He was expecting to see Katherine Hepburn, a much more established actress (no relation to Audrey), but instead he met a very young, very beautiful Audrey Hepburn. He was utterly charmed by her fragile demeanour, doe eyes and casual fashion sense. She was wearing a a tied-up T-shirt, tight trousers, sandals and a gondolier’s hat. Their first meeting sparked a friendship and creative collaboration that lasted over 40 years until Hepburn’s death.

Givenchy is credited for inventing “The Little Black Dress”, a creation first seen and worn by Audrey Hepburn in Breakfast at Tiffany’s. This dress was groundbreaking in its simplicity. It was a long black dress, fitted to the body, with a small opening in the upper back – as modern and elegant today as it was in the 1950s.

Hepburn said of Givenchy: “His are the only clothes in which I am myself. He is far more than a couturier, he is a creator of personality.” He felt great affection for her, often referring to her as “his sister”. His dress designs for her were not just for her film roles in movies such as Funny Face, Sabrina and Breakfast at Tiffany’s. She happily wore his ensembles in her personal life and her endorsement of his creations helped his career immensely.

in 1957 the Givenchy brand released a hugely popular fragrance inspired by Hepburn called L’Interdit. (Its name means “forbidden”.) Hubert de Givenchy originally created the fragrance for his friend Audrey Hepburn, who wore it exclusively for a few years. She finally released it to the public in the 1960s. It’s notable as being the first time a celebrity was the face of a fragrance and was used in its advertising campaign.

1973 marked an additional landmark in the House of Givenchy, with the launch of the first mens’ collection Gentleman Givenchy. In the later 70s the company also diversified into shoes, jewellery, furniture fabrics, kimonos and even a car in 1976: the Ford Mark!

In 1988 Hubert de Givenchy sold his business to Louis Vuitton Moët Hennessey, and retired in 1995. Givenchy was succeeded by many innovative designers including Alexander McQueen, John Galliano, Julien Macdonald, and currently by Riccardo Tisci, who is now creative director of the Givenchy empire.

Today Hubert de Givenchy lives a quiet life on his country estate Le Jonchet just outside of Paris, where he collects books, silver, and furniture. He has basically removed himself from the fashion world, but occasionally he gives public talks, like the one he gave at the Oxford Union in July 2010. At that talk, students who came to see the then 83 year old Givenchy were overwhelmingly female and many had made a serious effort with their outfits. Some were even wearing cocktail dresses, ball gowns and high heels. It seemed a fitting tribute to the designer who dressed some of the most glamorous women of the 20th century and one who helped define a golden age of elegance. 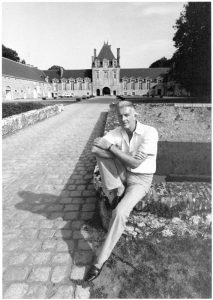