John Allan Meing is a pioneer in the men’s grooming industry.  In 1988, he introduced a men’s grooming club that offered a complete lifestyle experience: leather club chairs, billiard tables, cappuccino bars and top-of-the line services such as scalp massaging shampoos, hot towel treatments, hair cuts and shoe shines. Members pay an annual fee of approximately $700 to $800 and enjoy a list of services.  The first club in New York’s Financial District was such a hit the concept soon expanded to four more locations in New York, another in Chicago and his first international location in Toronto at Hudson Bay’s Queen Street store.  (John Allan is currently the number one men’s brand at Barney’s in New York.)

What I learned from Sinatra:

I didn’t create this men’s grooming concept. If you look at the original Ocean’s Eleven with Sinatra and the Rat Pack, the opening scene takes place in Druckers Hairdressing for Men in Beverly Hills. There is a barber, a manicurist, and there’s a guy with the hot towel. The manicurist rolls right up to Sinatra and gives him a manicure while he’s having his hair cut. My grandfather told me about this.  He used to get manicures all the time. Those guys did that. It wasn’t feminine.  It was pride. It was self-respect.

I met Sinatra. It’s a weird thing. I met him at the Waldorf on the escalator.  He was going in to get his hair trimmed.  I had seen him in concert later on in his life. He comes from Hoboken and my mother’s family is from Hoboken. Rumour has it my great grandmother used to babysit for him. I’m not sure if that is true but I’ve heard it from several family members.

What I’ve learned about how men shop:

Men shop with no emotion.  If they are coming to a retail counter, they are going there for a specific reason. One of the things that I think breeds them not coming back is this: They get over sold at the counter. Sales people make money on commission. Their job is to up-sell. But if a guy comes in and he leaves with three other products, he feels he’s got taken. He’s now spent $80 when he came in to spend $15 or $20.  Now the trust factor is gone. And as guys, that doesn’t sit right with us.   We don’t digest that very well – someone getting one over on us. With guys, once you earn their trust, they’re customers for life. You have to start slowly and educate them about products and services.  They don’t give a rat’s tail if Johnny Depp is using the product or not. It has to perform for them.

What’s on my iPod:

I come from the blues.  I’m a blues man. Lightin Hopkins to Ruth Brown to Big Mama Thorton, and Willie Dixon. It all came from my dad.  One day, I asked him why I like Ray Charles so much?  He said I’ll tell you why.  When you were a baby and you were fussy or wouldn’t go to sleep, I’d put you on the floor in the living room in between the two speakers of the stereo console and I’d play you Ray Charles. For some reason, it always calmed you down. To this day, when I hear Ray Charles play America, I cry. Sinatra said he was the best ever.

How I support the arts:

I’ve been supporting local artists since 1988. We bring in local artists and hang their work in the clubs.  We sell their art and we don’t charge commissions or anything. It’s so difficult for artists to get space today and galleries and the commissions they have to pay are incredible.  We even host cocktail parties for all the artists to introduce them to the members. Guys get new apartments and they don’t know how to decorate them.  This helps them out.

I’m versatile. One day you’ll see me in an ascot. You’ll see me in jeans a lot.  However it is, it’s easy.  I like Varvatos.  He came out of Ralph Lauren so you know the detail will be there.  His clothes are wearable for everybody – from Wall Street to 57th Street.

To Drop A Dime.  My dad passed in September. We were tight. So it has a lot to do with him. I’m not motoring through it, but I’m reading Fountainhead right now. It’s got me.  I read War and Peace and there are certain aspects of that book that I took into business. And The Tipping Point really helped me out. I’ve used that to help me make certain decisions.

The most charismatic man I’ve met:

My Uncle Babe Christian.  My whole family comes from the tavern/restaurant business. But my Uncle Babe really stood out with me because of the colour of his cardigans. It was the cars he drove, the way he carried himself, how he acted.  If you met him outside on a park bench, he’d make you feel like that bench was yours.

Raos Restaurant in the Bronx. It’s this little joint where the highest-powered people in New York eat. You can’t get a reservation unless they know you. And I was so taken aback by this old school restaurant that goes back 100 years. Fantastic meal. You don’t order. There’s no menu.  A guy comes and sits at your table and makes his recommendations.  The service is so incredible it doesn’t matter what thread count the table linens are. For me, it’s more about the comfort of the experience than the experience itself. I’ve been to great restaurants, but I’ve often felt sitting there I had to be somebody else.  I couldn’t be myself. 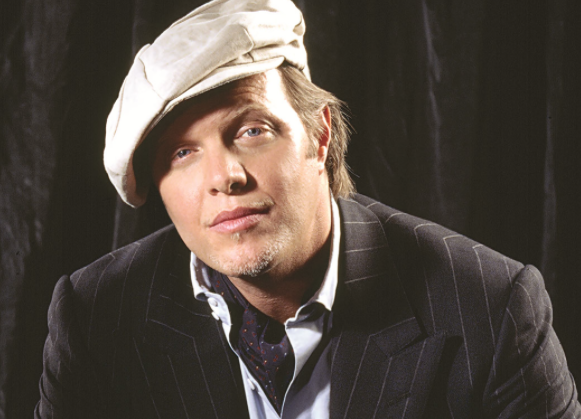