The remarkable career of Jason Wu

Jason Wu: From doll house to The White House. The fascinating story of one of this generation’s most talented fashion designers. 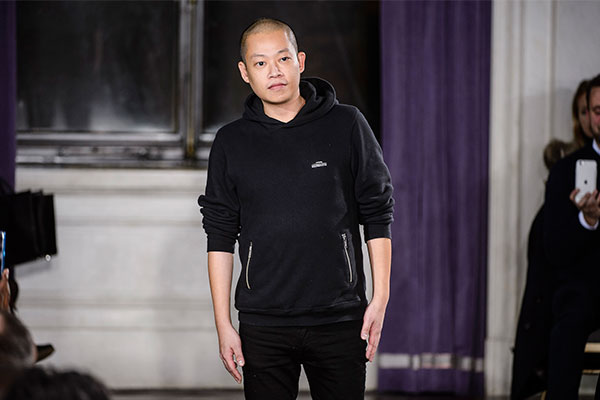 “I create clothes for women who are not only fiercely fashionable but also own their power and femininity, but the heart of my collection will always be the craftsmanship: everything starts with my obsession with details” –Jason Wu

Following in the footsteps of Donna Karan, Calvin Klein, Michael Kors and Ralph Lauren, Jason Wu represents the next generation of great American fashion designers. The Taiwanese-Canada designer is based in New York City where he creates exquisite evening gowns, accessories and chic day wear. He is most famous for designing the dresses worn by Michelle Obama on several occasions, including during the first and second inaugurations of her husband, American President Barack Obama. But he’s equally loved by Hollywood A-listers including Julianne Moore, Lupita N’Yongo, Diane Kruger and Jaime King. 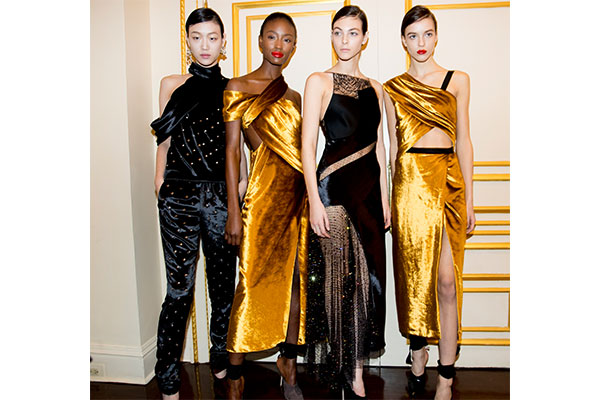 Jason Wu was born September 27, 1982 in Taiwan. From an early age, he demonstrated artistic ability, particularly in sketching and drawing. He was always attracted to fashion and his mother would take him to bridal shops so he could sketch the mannequins in the windows. He learned English by flipping through his mother’s Vogue magazines, and credits those early years for teaching him not only English, but “the language of fashion”. At age 9 his family moved to Vancouver, Canada to give him more opportunities to develop his artistic ability.

He first learned to sew when his mother bought him an old Singer sewing machine, and his first dress designs were for dolls. During this time, he had over 150 dolls – bought for him by his mother and father, both of whom supported their son’s artistic interests.

At age 14 he traveled to Tokyo, Japan to study sculpture. 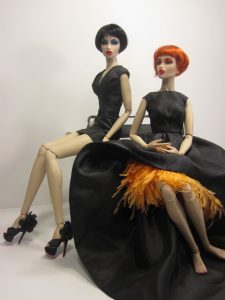 At age sixteen, he began his professional career by working as a freelance designer for Integrity Toys, designing high-end fashion dolls, including several RuPaul dolls. After only a couple of years working for the company, he launched a wildly successful “Fashion Royalty” line and was made Creative Director of the brand. To this day, his dolls are sought-after collector’s items and routinely sell for hundreds of dollars.

While spending his senior year of high school in Rennes, France he decided to become a fashion designer. He then studied at Parsons, The New School for Design in New York but did not graduate. He was more interested in working than studying, and was successful from a very young age. 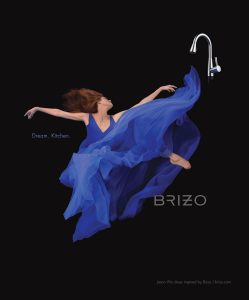 In 2006, his dresses were used in the Delta Faucet Company’s ad campaign for their Brizo line, where models were photographed underwater.

Jason Wu launched his first ready-to-wear collection for women in 2007 with earnings from his many years of doll designs. His work demonstrated a blend of Asian and Western fashion. He described it as “merging American sportswear with old-world sophistication and establishing a supremely feminine, modern sensibility.”

His designs have won many awards including the Rising Star award in 2008, the Swarovski Award for Womenswear in 2010 and International Designer of the Year at the Canadian Arts and Fashion Awards in 2016. 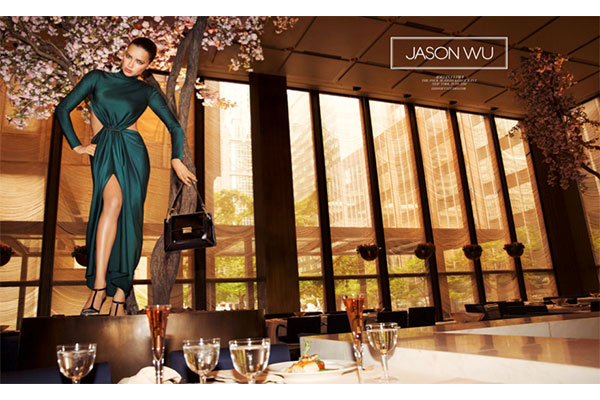 In 2013 Wu was named Art Director of Hugo Boss, to oversee their women’s wear line. Wu’s biggest move at Boss was to introduce looser, more versatile styles. He also debuted a signature bag – a first for Hugo Boss. 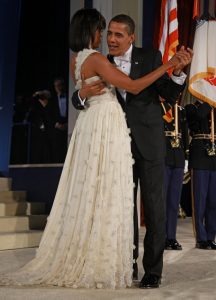 However, the biggest breakthrough for Jason Wu was when he was introduced to Michelle Obama in 2008. She bought four dresses from Wu and wore one of them on a Barbara Walters Special. She then wore another of his dresses, a one-shoulder, floor-length white chiffon gown, at President Barack Obama’s first-term inauguration ball in 2009. In 2013, at the second Presidential Inauguration Ball, Mrs. Obama again wore a dress that was designed by Wu – a ruby red velvet and chiffon design. She went on to wear many more of his dresses at state events, television appearances and on the covers of magazines.

Jason Wu’s dresses are renowned for their intricate embellishments and signature details. He uses embroidered pieces, custom feathers and sequins, some of which are hand-applied and take up to 1,000 hours to complete. This attention to every detail may be partly due to the countless hours he spent working on clothing design for dolls. His mastery of old-world couture techniques make his garments unique and sophisticated. 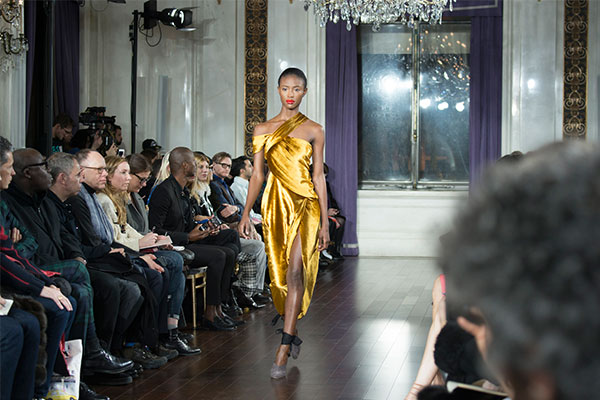 But as much as he loved couture, he also had a desire to make fashion accessible to everyday consumers. So in 2012, he designed a limited-edition collection of women’s ready-to-wear and accessories for Target. The collection included lots of pleating, bows, nipped-in waistlines and even a scarf with a black cat print.

In June 2016, he expanded his own brand offerings to include a sister line called GREY Jason Wu. It was a more relaxed collection, named after his favourite colour and characterized by chic silhouettes and playful graphics. It also included many artist collaborations and colourful prints.

In his personal life, Wu’s favourite place to escape to is The St. Regis Punta Mita Resort in Mexico. His favourite guilty pleasure is RuPaul’s Drag Race. When Jason married his long-time partner Gustavo Rangel in 2016 in Tuluum Mexico, RuPaul’s song, Supermodel (You Better Work), was one of their wedding themes. 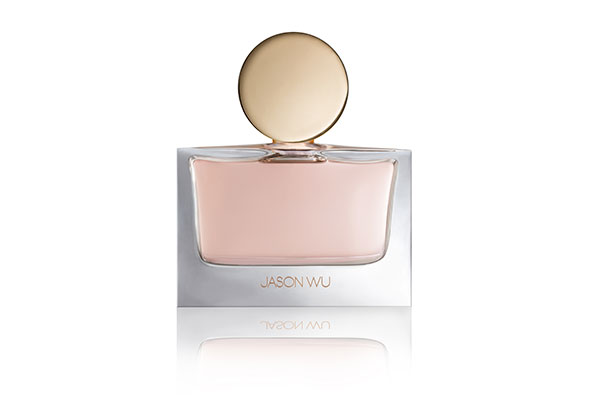 This fall, Jason Wu will launch his first signature fragrance. The nude-blush scent comes in a striking bottle with a circular gold cap that mimics the handle of his new handbags. The fragrance is a floral – a nod to his fashion lines which always include at least one floral print. And the star ingredient is jasmine sambac. “I remember when I was little, I lived in Taiwan and our neighbour had a whole wall of jasmine and I used to pick it,” he says. Perfumer Frank Voelk originally showed him over 200 raw ingredients and it was jasmine sambac that transported him back to his childhood. The memory was so powerful that he decided to build the scent around the fragrance tiny white flower. The pair were able to find a rare breed of jasmine only found in India that had the perfect elegant character to it.

Wu believes that today’s most important trend is the rise of a casual attitude. People are moving away from formal attire and it’s something that affects the entire fashion industry. He feels it’s important for fashion companies to respond to the needs of consumers and for prestige brands to elevate everyday items of clothing – like sneakers or handbags – into luxury objects.

“There is no clean-cut line to how people dress. It’s an interesting time in fashion.”
–Jason Wu

Jason Wu currently lives and works in New York City. He has a 10,000 square foot office, with a small book-lined nook where he still sketches by hand with a Uniball pen from Staples. Despite his material success, his most prized possessions are the thank you notes he’s received from clients. He says: “When people write me notes, it feels too special to throw away. I’ve been very fortunate to be able to meet so many different kinds of people who I never thought would a) know who I am, or b) even care. So I decided to put the notes up on one section of the cork wall and not recycle them because they are something that can never be replicated again, and that is very, very dear to me.” 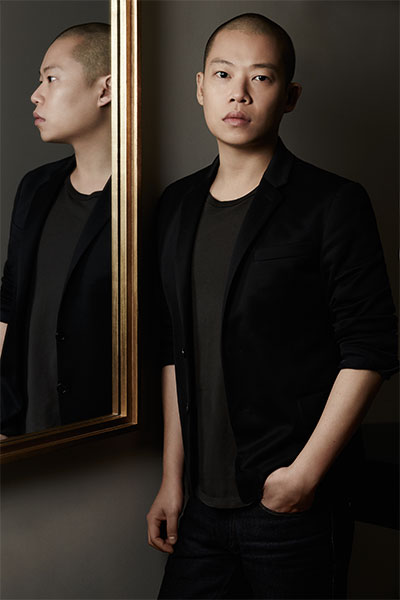 Jason Wu Eau de Parfum will be available exclusively in Canada at Hudson’s Bay stores and thebay.com as of August 23rd.