The Red Door: A history of Elizabeth Arden

Elizabeth Arden was born Florence Nightingale Graham in 1878 to English/Scottish immigrant parents. Her mother died when she was only 6 years old and she was raised on a farm in Woodbridge Ontario by her siblings and her father. She grew up in poverty and never finished high school. But over the next 70 years she managed to create a modern cosmetics company and became the sole owner of a $60 million business. 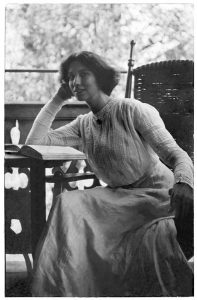 Florence Nightingale Graham had initially gone to school to become a nurse, but she couldn’t stand the sight of blood. She dropped out of nursing school and took a variety of jobs. In 1908 she moved to New York, where her brother lived. It was there that she took a clerical position at E.R. Squibb Pharmaceuticals company, where she learned about skincare. Although Florence was 30 at the time, due to her beautiful skin, she looked more like 20. She next took a job in a shop that specialized in facials, becoming a “treatment girl.” Her only qualifications were her beautiful skin and her healing hands, but she soon discovered that she had a natural aptitude for skin care and cosmetics.

In the next year, she and a friend, Elizabeth Hubbard, opened their own shop on Fifth Avenue — an area of upper class shops and department stores. To make their salon stand out, they painted the door bright red with brass accents, a tradition that lives on to this day. Unfortunately their partnership was short-lived. Florence and Elizabeth had a falling-out and soon parted ways. The story goes that to save money on sign painting Florence scraped just Elizabeth’s last name off the store’s sign, and then added the word “Arden” from Tennyson’s poem “Enoch Arden”. Thus the name Elizabeth Arden was born — a business name Florence used for the rest of her life.

In 1912 Florence, (now Elizabeth) travelled to France to learn beauty and facial massage techniques used in high-end Paris beauty salons. She got facials in every salon she could, studying their various techniques and products. And she returned with a collection of rouges and tinted powders she had found.

During this time, at the close of the Edwardian era, cosmetics were not worn by “nice” girls in America. Makeup was generally only worn by performers and prostitutes. But with the advent of the close-up in motion pictures, it became more acceptable for women to enhance their features with makeup. Arden was a marketing genius, adapting and making cosmetics popular for everyday use. She was one of the first to market eye makeup to “respectable” ladies along with her matching “Total Look” lip and nail lacquers. She was also the first to make a cosmetics commercial shown in movie houses.

Arden pioneered the use of skincare treatments to improve the health of the skin, not just mask it with makeup. “Every woman has a right to be beautiful,” was one of her most well-known quotes. Her revolutionary skin cream: Venetian Cream Amoretta, developed with chemist A. Fabian Swanson, had a fluffy, luxurious texture, unlike the greasy skin formulations women had been using in the past. It was a resounding success along with her corresponding lotion, Arden Skin Tonic. 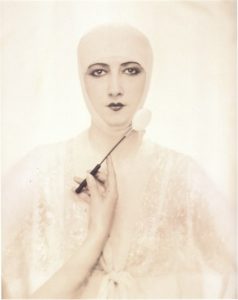 In 1920, she used the image of French model Cecille Bayliss, wearing a white head covering to symbolize purity. It became the Arden trademark for the next 20 years.

During the time she spent in Europe, Elizabeth was influenced by the permissiveness and art culture known as the Belle Epoque. Women were fighting for their rights in society and the right to vote was one of the most important to Arden. In 1912 she marched with 15,000 suffragettes in New York, many wearing red lipstick as a symbol of strength. Her company, Elizabeth Arden, supplied lipstick to the suffragettes.

In 1915, Elizabeth married Thomas Jenkins Lewis, her banker. In doing so, she became an American citizen. Thomas took over management of Elizabeth’s cosmetics lines, but she made sure to tell him, “Dear, never forget one little point. It’s my business. You just work here.”

Also in 1915, she began opening more salons and introduced the concept of the “makeover”. She opened salons in many cities in the United States such as New York, Washington, Boston, Chicago and Beverley Hills. She launched internationally in Honolulu, Melbourne, Hong Kong, London, Paris, Milan and Rome. She personally opened each salon, travelling extensively and greeting her customers personally. 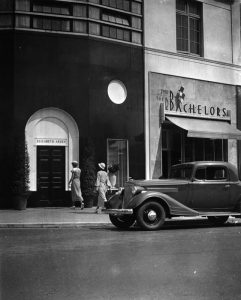 By the 1930s Arden still owned every one of her more than 100 international salons, (with the exception of the Paris salon that she gave to her sister Gladys). She owned all company stock and was president and chairman of the board. Fortune magazine said at the time she “earned more money than any other businesswoman in the history of the United States.” The New Yorker magazine did an article about her in 1936.

Despite the Great Depression, her business thrived. The New York salon expanded to seven floors. Arden’s signature “Red Door” salons became havens for women and were the inspiration for the fictional salon in the movie The Women, where Joan Crawford and Norma Shearer go for “Jungle Red” manicures and to do their daily calisthenics. Arden was a firm believer in holistic beauty. She encouraged women to hydrate, avoid the sun and do yoga — revolutionary ideas at the time but concepts that are now recognized as fundamental.

With the beginning of the Second World War, Elizabeth Arden recognized the changing needs of many women who were entering the workforce for the first time. She showed women how to adapt their makeup and grooming for work outside of the home. In England the women’s auxiliary of the armed forces wore “Auxiliary Red” lipstick, packaged in cylinders specially designed to fit in their uniform pockets. While in the United States, female Marine officers were permitted to wear lipstick in “Montezuma Red”, a shade Arden created to precisely match the tassels and hat stripe of their uniforms. 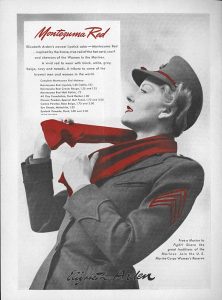 By 1944, the rationing of silk for war parachutes meant that stockings were not readily available. In response, Arden developed a “liquid stocking” called Velva Leg Film that made the legs look more toned and tanned.

Throughout her career, Elizabeth Arden had a well documented feud with her rival in the beauty industry: Helena Rubenstein. Although they lived and worked only blocks apart in New York for over 50 years, the two women never actually met. When one of them developed a new product, the other was quick to come out with a competing product. For instance, in response to Arden’s Velva Leg Film, Rubenstein was quick to counter with her own formula called Aquacade Leg Lotion. It’s said that the rivalry inspired them both to greater creativity but on top of that they stole each other’s chemists, fought each other for placement in department stores, and wooed each other’s key staff. Apparently it became so bad that when Arden divorced her husband Thomas in 1934, he went to work for Rubenstein (“that woman,” as Elizabeth Arden called her). And whether the rivalry was mostly genuine or sometimes just for publicity, the story is fascinating. It’s told in a book: War Paint and a 2009 movie: The Powder and the Glory.

After her divorce from Thomas, Elizabeth went on to marry a Russian aristocrat, Prince Michael Evlanoff. Although her second marriage only lasted two years, the glamour of marrying a Russian prince, and her friendship with society ladies Elizabeth Marbury and Elsie De Wolfe helped her to be accepted by New York’s upper class. With her new friends, she organized several highly successful charity balls and entered the elite world of horse racing. 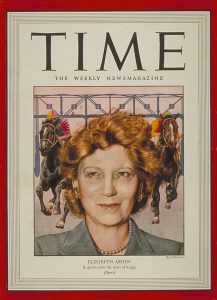 Horses were Elizabeth’s passion, perhaps due to the influence of her father and her early life on a farm. But unlike many, she actually made money on her equestrian ventures. She established Maine Chance Stables named after her first country home. Her horses were her babies and she was known to massage their legs with her famous 8-Hour Cream. In 1945 her horses’ winnings totalled $589,000. In 1946 she appeared triumphantly on the cover of TIME magazine looking 30 years younger than her actual age – she was the epitome of beauty and refinement. The following year her horse, Jet Pilot, won the Kentucky Derby.

At one point, it was said that “There are only three American names that are known in every single corner of the globe: Singer sewing machines, Coca Cola, and Elizabeth Arden.”

In recognition of her contribution to the cosmetic industry, she was awarded the Légion d’Honneur by the French government in 1962.

Elizabeth Arden died in 1966 in New York City aged 87. She was the sole owner of her empire and left $4 million to her devoted employees, $4 million to her sister and a large bequest to her niece. The company is now owned by Revlon and is estimated to have annual gross sales of $3 billion. 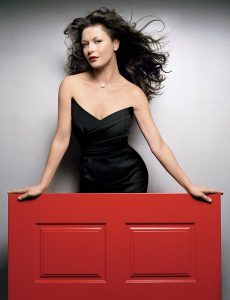 Lindy Woodhead, the author of Arden’s biography, called Elizabeth “a tough little Canadian” who could swear like a longshoreman. But Arden was all business and knew what women wanted. To this day, the iconic Red Door remains a symbol of refinement and luxury beauty. 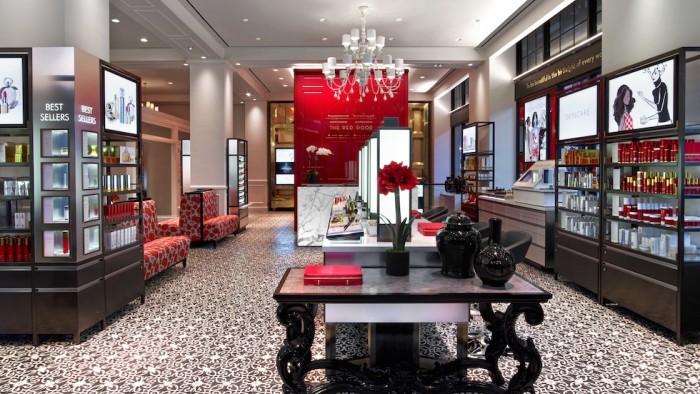