The fascinating story of Estée Lauder

Estée Lauder was an entrepreneur, mother and would-be actress who founded a worldwide beauty empire based on her strong belief that every woman is beautiful. Her creativity, drive and innovative marketing techniques made her the richest self-made woman in the world. She was also known for her devotion to family, leaving a legacy of children and grandchildren who still work in the company that she founded.

“I didn’t get here by dreaming or thinking about it. I got here by doing it.”
–Estee Lauder

Estée Lauder (Josephine Esther Mentor) was born to a Jewish immigrant family in Queens New York in 1908. Her father was a Czech hardware store owner and her mother was a legendary Hungarian beauty. Estée’s name was derived from “Esty” the nickname her parents called her. She was very interested in beauty from an early age and loved looking after her mother – brushing her long hair and applying her face creams. It has been said that her interest in retailing was sparked by helping her father with his store’s window displays, but her true calling came when her uncle John Shotz, a chemist, arrived to stay with the family. He taught her to cleanse her face with oils instead of harsh soaps, and he showed her his formula for skin cream which he mixed up in a backyard shed at their home.

In Estée’s words, his skin cream “was one that magically made you sweetly scented and made your face feel like spun silk.” She called it the Super-Rich All Purpose Creme. After using it herself and seeing the excellent results, she started selling the cream to her classmates at school. 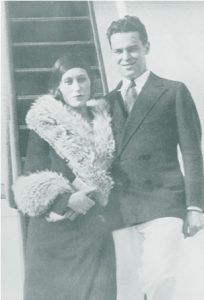 Her family spent summers on Mohegan Lake in New York, and it was there that she met her husband, Joseph Lauter, a native New Yorker (who later changed his name back to the Austrian spelling of Lauder). He was her first “beau” and they married in 1930. Esty’s dress was a satin gown, and she carried Calla lilies in her bouquet. For the first time in her life, she donned a touch of lipstick, which would become a habit for the rest of her life. It was here that young “Esty” transformed into the glamorous Estée. Her handsome husband was in the garment industry and his business know-how would be key in their future together, forming what would become The Estée Lauder Company.

Estée had her first child, Leonard, in 1933, but continued to develop skincare products and sell them to her friends. Like many chic young women in the city, she got her hair colour “refreshed” at The House of Ash Blondes. It was there that the owner asked her how she kept her skin looking so wonderful. Estée recognized that a prime opportunity had presented itself. A month later she returned to the salon with an assortment of her skin creams which she proceeded to demonstrate to the customers while they were under the hair dryers. The salon owner was so impressed with the results that she hired Estée to run a skincare and beauty business out of the salon.

“I wanted to see my name in lights, but I was willing to settle for my name on a jar.”
–Estee Lauder

In her early adult years, Estée had aspirations to become an actress as she felt that “actresses were the epitome of beauty”. She even had a brief stage career, appearing in a couple of productions at New York’s Cherry Lane Theatre. But in the end she found that acting wasn’t as rewarding to her as developing skincare solutions and helping women feel more beautiful. As she put it: “I wanted to see my name in lights, but I was willing to settle for my name on a jar.”

1n 1946, Estée officially launched her beauty company with four basic products: The Cleansing Oil, The Creme Pack, her uncle’s Super-Rich All Purpose Creme and The Skin Lotion. In the early days of the company Estée and her husband Joseph manufactured the skin care creams themselves in the kitchen of a former restaurant and then hand delivered the products to their customers. Estée was a one-woman promotion department, and many say she was a woman you couldn’t say no to. She travelled around the city of New York to hair salons and hotels performing makeovers on women and literally putting her products into their hands.

Her marketing philosophy was summed up in her famous quote: “telephone, telegraph, tell-a-woman” which is just as relevant today in the era of social media as it was in the 1940s. She was a true visionary, recognizing the value of word of mouth marketing. She also handed out liberal samples, allowing customers to experience the product firsthand. Although she didn’t have a college education, her instincts were superb and she knew what women wanted. She knew that to make a sale, you had to touch the customer, show her real results and explain the product. She pioneered personal beauty consultations and “Gift with Purchase” – two strategies that are now used extensively in beauty marketing.

In 1947 Estée Lauder’s business had a breakthrough. Saks Fifth Avenue ordered $800 worth of her products (about $10,000 by today’s standards) and her products sold out in two days. At this point, with her orders increasing, Estée needed to design packaging that was consistent with a prestige cosmetic line. She settled on pale blue containers that she reasoned would look elegant in any bathroom décor. 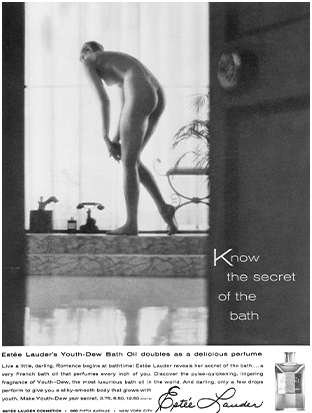 After her success with Saks, she widened her product offerings to include fragrance. Youth Dew was the first of these new products – a bath oil that doubled as a fragrance. Other fragrances followed over the years, including some of the most successful ones of all time, including Aramis (for men) and Beautiful.

Estée believed that “3 minutes is all beauty should ever take.” She branched out into makeup and created quick routines which she demonstrated on women no matter where she travelled. She was known for doing makeovers on trains, in elevators and even in the street. She loved nothing more than transforming women and giving advice with her own personal touch. In terms of marketing her makeup, she found that naming her lipsticks with “honest, lucid and graphic descriptions” helped sales immensely. Early lipstick names included: All Day Rose, a soft pink suitable for work and Dancing Red, the perfect colour for a night out on the town.

Mrs. Lauder was always fearless in her approach and could be very creative in order to get what she wanted. One story goes that when the manager of the prestigious Galleries Lafayette department store in Paris refused to stock her products, Estée “accidentally” spilled a bottle of Youth Dew on the floor during a product demonstration. Women passing by smelled the alluring fragrance and started asking where they could purchase this wonderful product. Seeing this, the manager relented and gave Lauder her initial order.

In 1956, Estée launched her most luxurious cream yet: Re-Nutriv. It retailed for $115 (approximately $1000 in today’s money). But the quality of the product, the marketing and most importantly, the results, justified the price tag and the product was a huge success. Today the Re-Nutriv line is one of Estée Lauder’s most well-loved products. 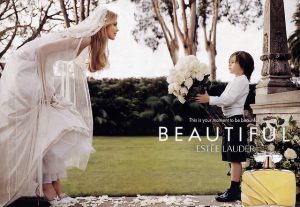 In 1973, Estée Lauder handed over the reins of the company’s day-to-day operation to her son Leonard, but she did stay on as the company’s chairman of the board. After losing her beloved husband in 1983, she formed the Joseph H. Lauder Institute of management and international Studies at the University of Pennsylvania. She wrote an autobiography in 1985 called Estée: A Success Story where she shared her incredible journey from making cosmetics in a little kitchen in Queens to becoming the head of a multi-million dollar global beauty company.

Estée worked hard, often seven days a week and she had a whirlwind social life, attending parties with celebrities and socialites such as Nancy Reagan, Wallis Simpson and Grace Kelly. She became one of the richest self-made women in history. Even so, her son Ronald says that she loved her family most of all and especially loved to cook for them. He recalls fondly that even while cooking, she’d have her hat on, her purse nearby and was always wearing blush. She had always said that there were no homely women, just careless women. Clearly, she believed this fundamentally and never once was she careless. She cared, and gave her best at all times.

Estée Lauder’s 15 rules for aspiring entrepreneurs.
1. Find the proper location.
2. When you’re angry, never put it in writing.
3. You get more bees with honey.
4. Keep your own image straight in your mind.
5. Keep an eye on the competition.
6. Divide and rule.
7. Learn to say no.
8. Trust your instincts.
9. Act tough.
10. Acknowledge your mistakes
11. Write things down.
12. Hire the best people.
13. Break down barriers.
14. Give credit where credit is due.
15. Train the best sales force.