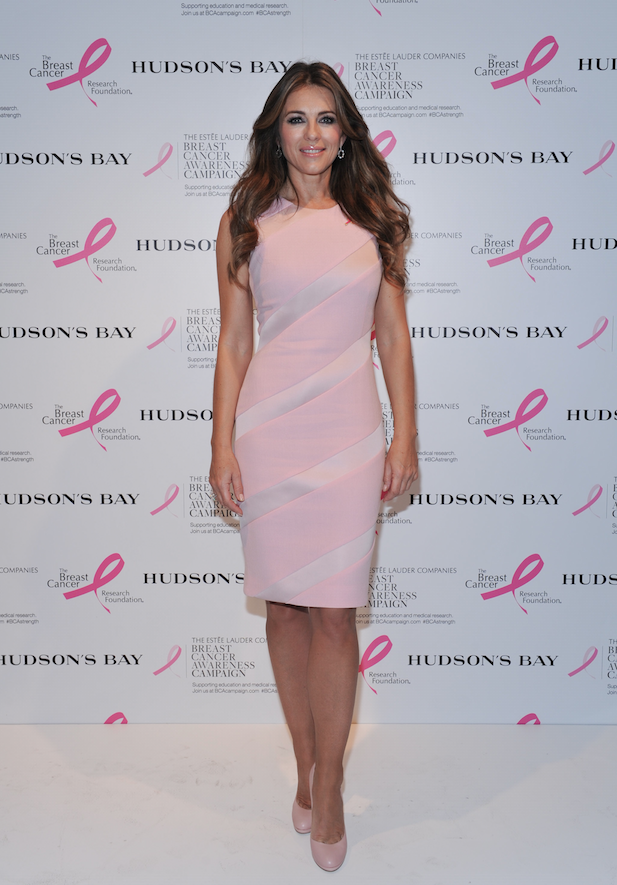 It’s hard to believe it has been more than 20 years since Estee Lauder first signed British actress Elizabeth Hurley to her first modeling job at the age of 29. She remains as beautiful and statuesque as ever as she travels the globe in her role as Global Ambassador for the Breast Cancer Awareness Campaign. “When I started with Estee Lauder, I was the only model. Today, they have six or seven models who represent different products. But when, I started, I was the face of everything: every fragrance, skincare and makeup launch. I even did all the voice over’s,” she laughs while making a quick visit to Toronto to mark Breast Cancer Awareness Month and support The Breast Cancer Research Foundation. “It’s a very different time now than when I started. But what I love is that my role within the company has constantly evolved.”

When asked to pinpoint the highlight of her career so far, she pauses, then says, “It is my role in the fight against breast cancer. It is the toughest, most humbling, disturbing and rewarding thing I’ve ever done. This afternoon, I have to go down and spend time with some survivors. It is going to be tough to listen to their stories. It is a horrible disease.” 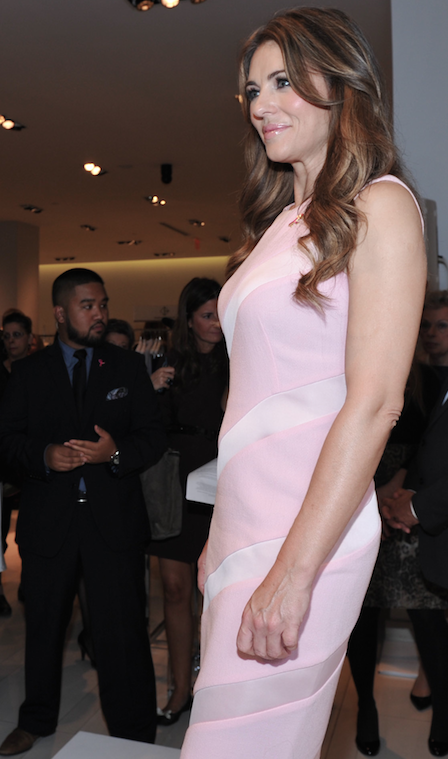 That truth hit close to home when she lost longtime friend Evelyn Lauder to cancer having spent years working tirelessly with the philanthropist across every continent. “My favourite memory of Evelyn is watching her dance late into the night at my wedding in India. She was so lively and really loved to laugh. You know, she had a naughty sense of humour. She could really tell a risqué joke. But she had this ability to bring people together in the most diplomatic way as well.” The pair along with the foundation Evelyn founded has raised an astounding $53 million to support global research, education and educational services. The BCA Campaign is active in more than 70 countries and has helped fund more than 166 BCRF research projects worldwide in the past 20 years.

“The most important message I can share with everyone is that breast cancer is 95% curable if treated early,” she says. “And it rarely reoccurs. We are making amazing strides in fighting this disease. For example, scientists have made an important discovery recently: breast cancer is actually four different types of cancer – not one. This now allows doctors to omit unnecessary chemo or treatment once they know the type.” She says there is hope. And the key is self-examinations to spot problems early so they can be treated. “I also encourage women and men to raise as much money as they can to fund more research.” Hurley’s own grandmother died of the disease.

It’s a wonder that Hurley can juggle a global tour in support of this charity while caring for her son Damian and acting in E! Network’s scripted series, “The Royals” that revolves around a fictional British Royal Family and set in modern London. She plays the matriarch Queen Helena. It’s set to air in 2015. 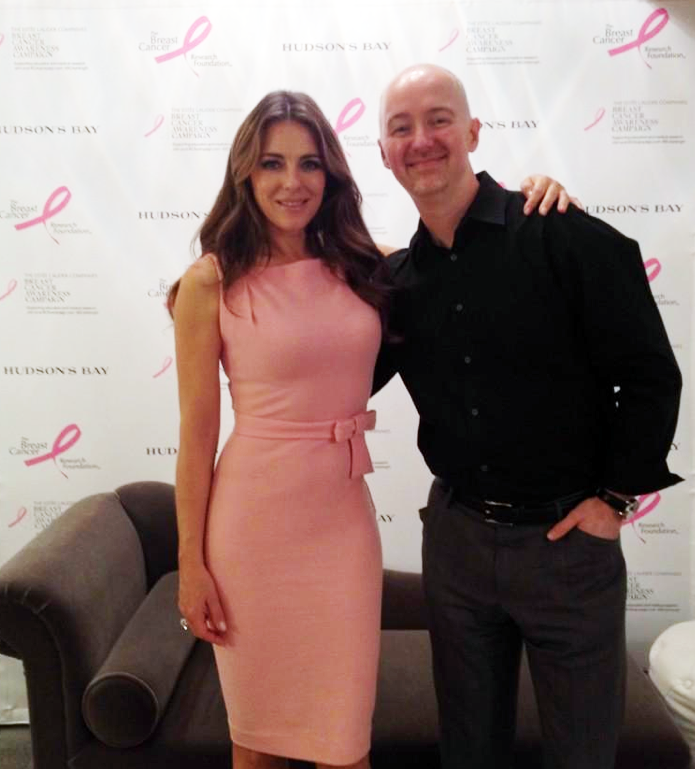 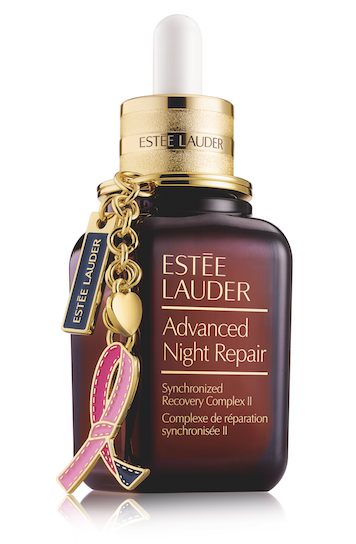 “I believe hydration is the key to life,” she says rubbing a dab of Clinique’s Dramatically Different Moisturizing Lotion into her hands. “Well, of course it is life, but it is the secret to great skin. I am constantly patting on Advanced Night Repair Serum under my eyes. I keep one in my downstairs bath. Every time I walk by, I stop and just pat some on. It keeps my skin so hydrated.” She says you can’t start too young taking care of your skin.  She remembers saving up money when she was 18 or 19 to buy her first bottle of DDML moisturizer. “I still love it and use it as hand cream.”

When it comes to beauty, Elizabeth has one clear love. “I personally love pinky-nude glosses. I put them on all day. I particularly like this Bobbi Brown formula. I tend to lick my lips all day so I’m always reapplying. For the TV show I’m shooting, I have a MAC lip pencil that I line my lips with then fill in with gloss.” 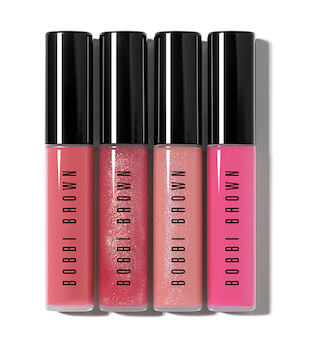 “For evening, I like a dark smoky eye and a nude lip. It’s something I feel comfortable wearing. But it all depends on your colouring. You have to do what is right for you.” Having spent two decades working with Estee Lauder’s top makeup artists at photo shoots, she’s clearly picked up a few pro tricks. “I’ll tell you a secret,” she laughs. “I’m addicted to little travel sizes of products. Whenever I go into the Estee Lauder offices, I beg them to give me little travel sizes. I love just throwing them in my bag when I travel.”

She’ll soon be jetting back to London to resume shooting The Royals. So where does she like to unwind after a hectic workweek? “In London, the hottest restaurant right now is The Firehouse. It’s trendy and fun and delicious. That is, if you can get a table. I sometimes go to Lucio for the best Italian food. But more often than not, I’ll go to my favourite little café. It’s called Café Colbert in Sloan Square, a little French bistro that serves chic breakfast food all day. It’s rare to find a true French bistro in London. It’s my little secret place.”  And with that, Elizabeth is whisked downstairs for her next appointment. She’s as lovely inside as she is beautiful. (Visit BCAcampaign.com for more info on the charity.)