Scent of Peace: Nina Ricci’s L’Air du Temps fragrance inspired a war-weary generation to embrace freedom and peace. Its message is more timely now than ever.

“A fragrance is a work of art, and the object that contains it must be a masterpiece.” – Robert Ricci 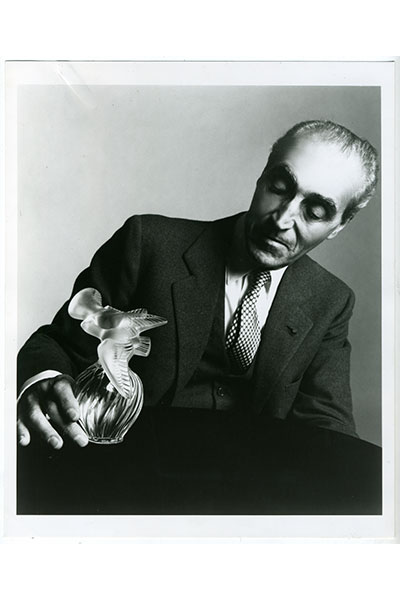 Maria Nielli, nicknamed ‘Nina’, was born in Turin, Italy in 1883. At the age of 12, her family moved to France where she began an apprenticeship at a dressmaker’s learning the art of pattern cutting, fabric draping and sewing. This work became a passion of hers and she continued to sew throughout her teen years eventually becoming a skilled seamstress. She would fall in love with an Italian jeweler and composer named Luigi Ricci and marry in 1904. After giving birth to a son named Robert, she joined fashion label Raffin where she combined design prowess with business savvy eventually becoming Raffin’s business partner after 20 years. In 1932, at the age of 49, she decided to strike out on her own and launch her own design house simply called ‘Nina Ricci’. It quickly became a family affair: Maria designed the clothing and her son handled the finances. Paris aristocrats quickly flocked to her atelier for the refined and feminine designs. 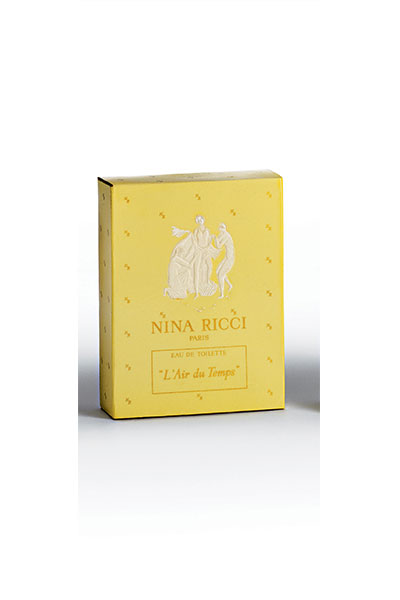 It was Robert’s idea to create a fragrance to celebrate freedom after years of war. It would be called ‘L’Airs du Temps’ (meaning ‘spirit of the times’) and he turned to master perfumer Francis Fabron to create a modern, light floral that would reflect the elegance of Madame Maria Ricci’s gowns. The formulation itself was strictly edited to 30 ingredients: a floral bouquet wrapped in the silken benzyl salicylate, a groundbreaking ingredient that created blooming effect. Add in some bergamot, rosewood, clove, lily, carnation, gardenia, peach, orris, and dusky woods and you have an elegant, spicy-floral for her. 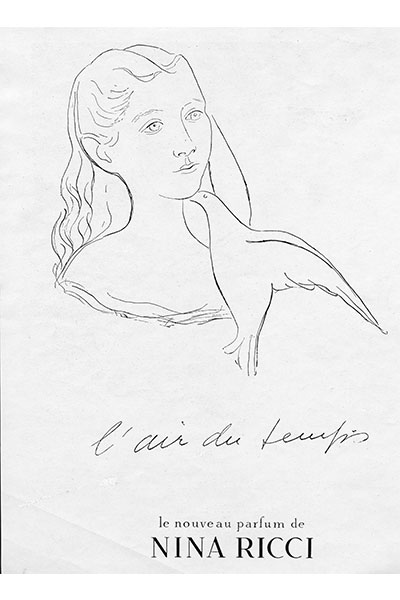 “There is always that special mysterious something that makes one fragrance more seductive than another: there is something of a minor miracle about L’Air du Temps which gives it its distinctive personality,” said Robert Ricci. “In the same way as a dress is designed to enhance the wearer, so a fragrance is created to seduce in the most subtle of ways. Its purpose is to exalt the personality, and achieve the ideals that the wearer sets for herself. It is a ‘protection’ in the same way as a veil. It ‘shelters’ the wearer inside a fragrance aura.” 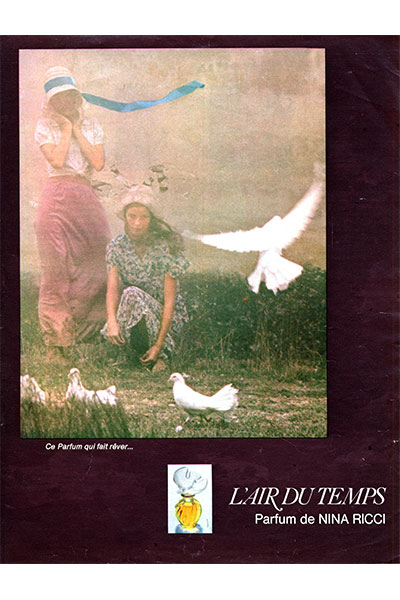 Robert’s idea of using two intertwined doves on the cap was brilliantly interpreted by Marc Lalique in 1951 who designed the crystal bottle. In fact, both families got along so well that the Lalique family manufactured bottles exclusively for the house until the 1950s. (The first L’Air bottle was created by Joan Rebull in 1948 and featured a crystal sun with a sculpted dove cap.) In 1991, the L’Air du Temps flacon was named ‘perfume bottle of the century’ and remains admired and appreciated around the world. 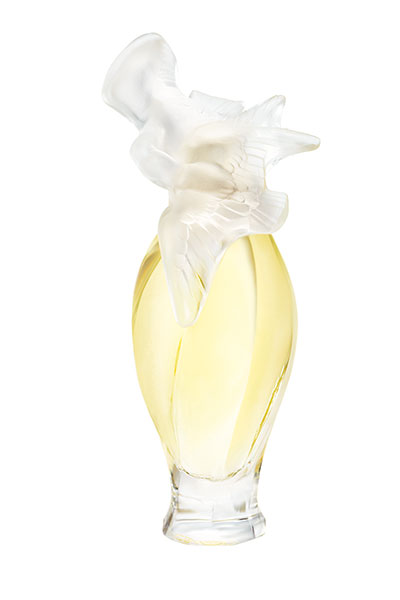 What is astonishing to learn is that in over sixty years, Nina Ricci has never revealed the quantity or quality of the hand-sorted ingredients. Even the maceration time of five weeks remains the same. The formula is still passionately protected.

“French perfumery was an art and it is important that it remains one or becomes one again. It is also important that we rediscover the passion for creating the fragrances and visual appeal that, with talent, are vital for the truly inspired creativity that transcends fashion.” – Robert Ricci

This season, Nina Ricci has reimagined the classic scent in a modern version of white flowers and musk.

Fragrance style: A radiant interpretation of the iconic L’Air scent

Notes: a sillage of white flowers including carnation that mingles with yuzu, tuberose and musk

The bottle: The twin doves and flacon are dipped in gold

The Giveaway: I gave away a bottle of Nina Ricci L’Air du Temps to one lucky reader. To enter, I invited readers to tell me in a blog post comment below if they’ve every tried L’Air du Temps before? Denae Boucher told us and we drew her name from all entries. Congrats Denae! 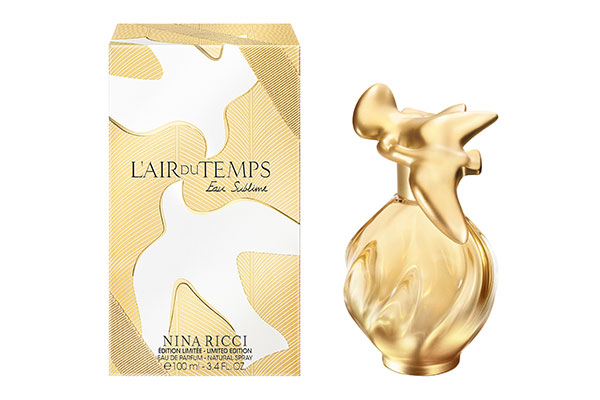 Nina Ricci fragrances are available in Canada at Hudson’s Bay stores and thebay.com