Nestled amongst a series of tacky tourist shops and attractions along Highland Avenue in Los Angeles sits a grand Art Deco building designed by famed architect S. Charles Lee. It is the home of the Max Factor Makeup Museum, and was in fact, purchased by the famed Hollywood makeup artist, wig maker and inventor in 1928 – just months before the stock market crash that led to the Great Depression. It didn’t open until 1935, but when it did, it changed they way cosmetics were marketed and sold in America. Everyone wanted to look like their favourite stars up on the Silver Screen, and cosmetic sales took off. Factor created the signature looks of most of the first screen legends such as Marlene Dietrich, Clara Bow, Joan Crawford and Jean Harlow. In 1935 he introduced the first commercially available foundation called Pan-Cake Foundation. Motion pictures, Max Factor, Helena Rubinstein and Elizabeth Arden changed the world, and for the first time, society and working class women could purchase makeup without the stigma of being labeled “hussies.” Up to that point, makeup had mostly only been worn by actresses and prostitutes. 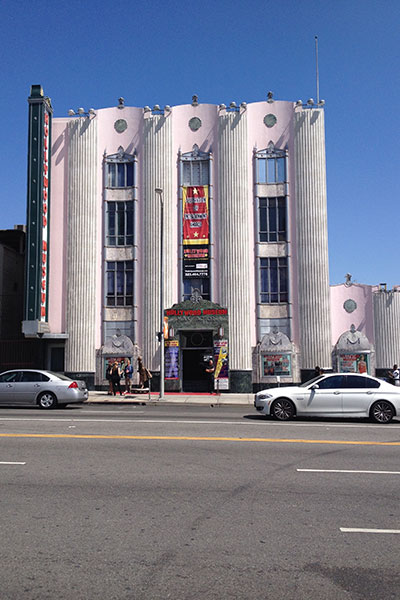 The lobby of the building at 1660 N. highland Ave. was a white and rose-coloured oasis of lavish marble, re-created historical chandeliers, pastel hues, antique furniture, trompe l’oeil, and faux finishes with 22kt gold and silver leafing. It was so impressive that it elevated the whole ide of makeup for society women – a concept Factor dreamt up. In fact he even created a line called Max Factor’s Society Makeup catering to the refined woman. It was a brilliant stroke of marketing. 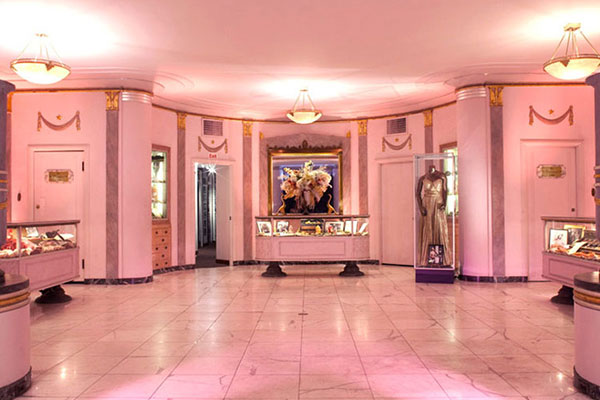 One of the most famous movie stars to frequent the Max Factor Building was Norma Jean Baker, or Marilyn Monroe as she’d later become known. It was in this building, in the room designated for “blondes” that Monroe became a blonde. The character of Marilyn Monroe with the platinum blonde hair and the crimson red lips was born in that room. 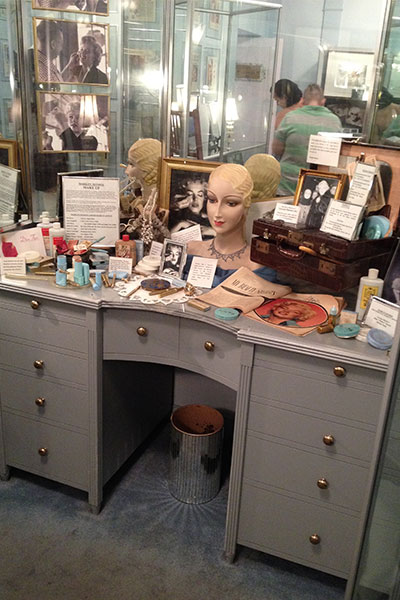 Marilyn Monroe’s Makeup Desk where she became a blonde.

“Whitey Snyder, a top Fox makeup artist happened to be Marilyn Monroe’s favourite,” says actress Joan Collins who was signed to the Hollywood Studio system early in her career. “Whitey built Marilyn a black metal travel case to carry her extensive collection of cosmetics. When she first came to Fox, she wore far too much makeup, particularly her base, which was far too thick and heavy. And she had old-fashioned ‘bee-stung’ lips and unplucked eyebrows. Whitey and she worked on her look together. He taught her to put Vaseline on her face to create the illusion of depth and luminosity. Her eyebrows were plucked and painted into a winged look. And he put plenty of shiny gloss over her famous lips, which made them appear bigger with lipstick.” 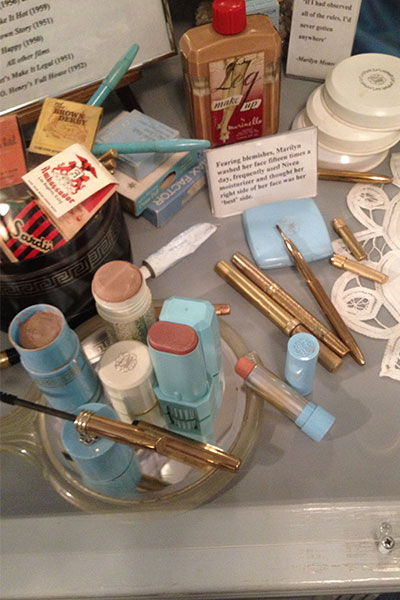 “Whitey taught me a lot,” continues Collins. “Particularly how to apply foundation with the lightest touch and always to blend, blend, blend.” Aspiring actresses and actors, like Collins and Monroe were required to attend makeup classes while signed to Twentieth Century-Fox. 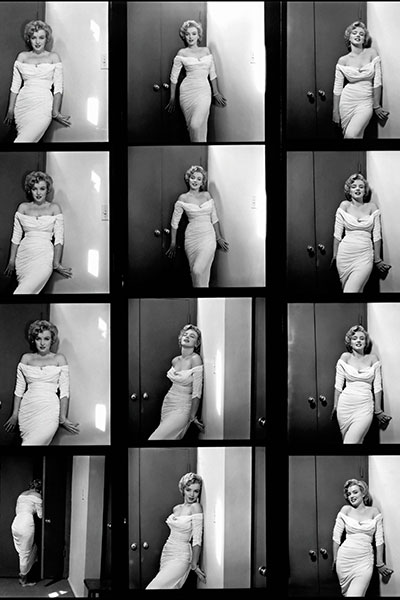 Many of the makeup techniques taught there were created by Max Factor who did away with the heavy grease paint formulas, and instead created lighter foundations. 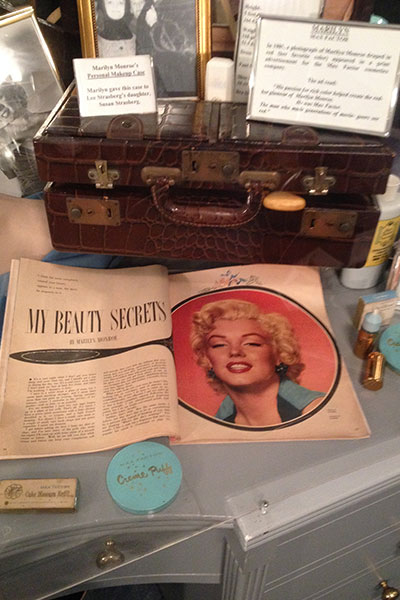 One of Marilyn Monroe’s makeup cases.

One of the most thrilling experiences for anyone who loves makeup is walking into the Marilyn Monroe room in the Max Factor Museum, surrounded by her makeup and personal effects. 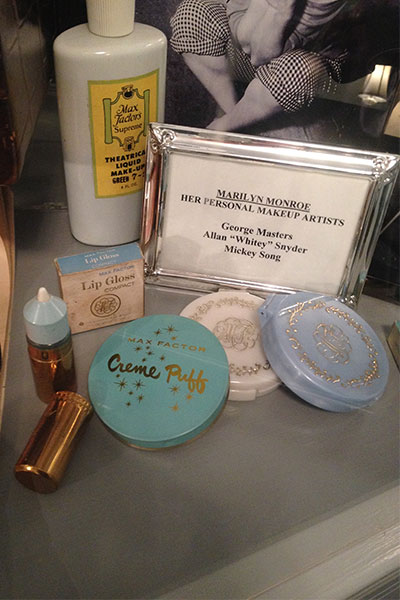 You see her makeup case where she stored all her products. You see actually foundation sticks and lipsticks that she used when making herself up for a scene. Most of the time, Factor or a studio makeup artist would create her look depending on the role she was playing. Fearing blemishes, Marilyn washed her face fifteen times a day, frequently used Nivea moisturizer and thought her right side of her face was her ‘best’ side. 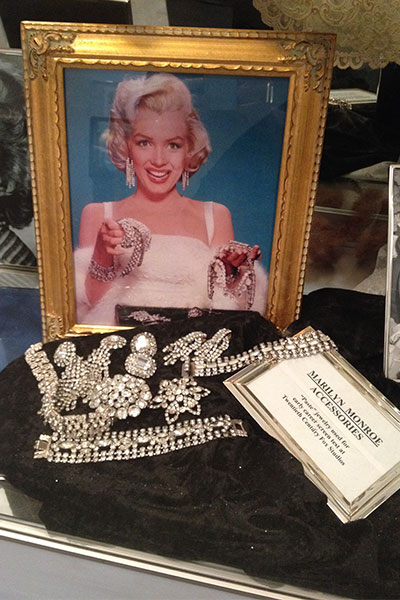 The room is lined with photo stills from her pictures, advertisements and a video screen that plays “Gentlemen Prefer Blondes”, arguably one of her most radiant performances. Who can forget the line, “I just love finding new places to wear diamonds”? 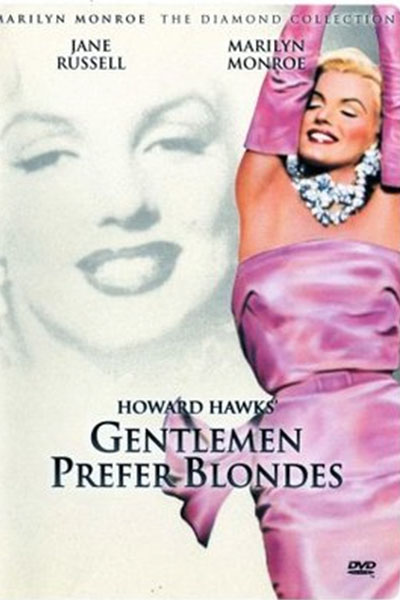 It was in that same building that Factor dyed Lucille Ball’s hair red and created the signature makeup look of dramatic lashes and red lipstick. He really was the most influential makeup artist of the Golden Era of Hollywood. 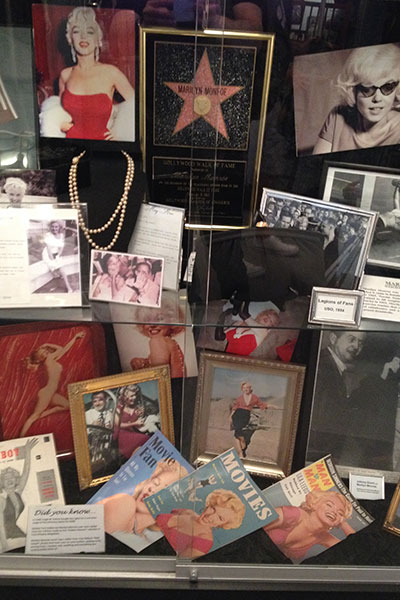 Born in Poland in 1910, Factor emigrated to America to be closer to the film industry. By 1916, was selling eyeshadow and eyebrow pencils to women. He became renowned for creating glamorous yet realistic makeup looks for onscreen. Four years later, he introduced a full line of products available to the general public. He came up with the name “make-up” to describe it. 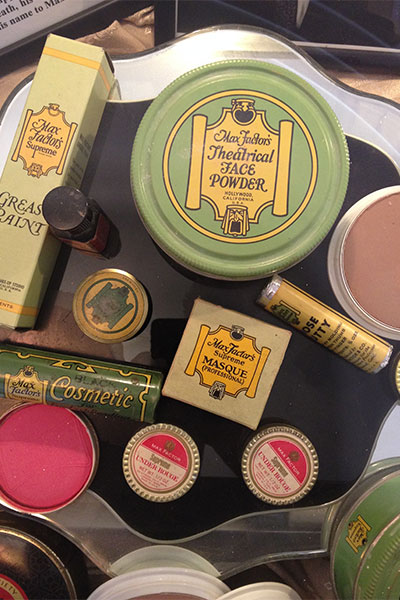 He was known for saying, “You are not born glamorous. Glamour is created.” And that couldn’t have been more true with Monroe. He went on to win an Oscar for his pioneering beauty techniques and products. But one of his most impressive achievements is his guiding hand in creating Marilyn’s iconic look. 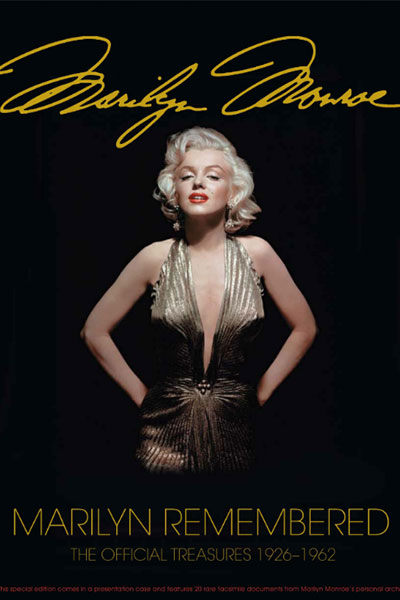