The fragrance that was designed to symbolize eternal love is celebrating its own milestone. Eternity Calvin Klein is marking its 25th anniversary this month with a pair of limited edition bottles and the return of an iconic ad campaign. The 1995 ad campaign, shot by famed photographer Peter Lindbergh, starring Model and Maternal Health Advocate Christy Turlington Burns & Mark Vanderloo will be reissued to mark the occasion. It’s a timely launch as Eternity for Men just received the prestigious Hall of Fame Award at last month’s Canadian Fragrance Awards.

“For 25 years, Eternity Calvin Klein has remained a top-selling global fragrance brand,” says Steve Mormoris, Senior Vice President of American Fragrances, Coty Prestige. “Its beloved advertising campaigns are part of popular culture and are still as relevant today as they have always been.”

To mark the silver anniversary, both Eternity and Eternity for Men will come in bottles wrapped in a sleek, silver metallic finish. The new tag line will be “Time can’t touch us. Celebrating 25 years.” Less than 5 percent of fragrances launched today last five years, let alone 25. This anniversary is a testament to both the fragrance compositions and the ad campaigns. 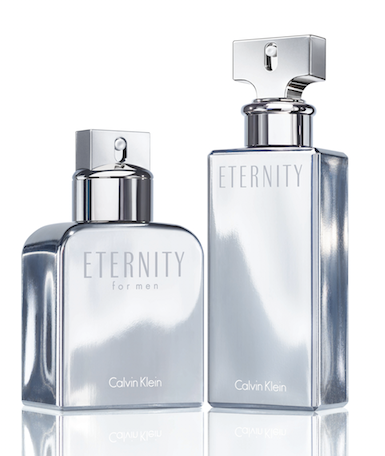