She was the most glamorous woman in the world, and he created the most the world’s most beautiful clothes. Jeff Smith investigates the unique relationship between Dietrich and Dior. Unlike Givenchy who is so closely associated with Audrey Hepburn, Christian Dior was not associated with only one face, probably because his clothes were worn by everyone who wanted to look au courant as soon as they appeared. Dior’s infamous February 12, 1947 inaugural collection, after training at the fashion houses of Robert Piguet and Lucien Lelong, caused jaws to drop and was dubbed the ‘new look, by Harpers Bazaar editor-in-chief, Carmel Snow. This collection changed fashion over night when Dior changed the silhouette from short and boxy to a long voluptuous hourglass with miles of fabric, making every woman’s wardrobe immediately obsolete.

Actress and cabaret entertainer Marlene Dietrich and her daughter, actress Maria Riva posed on the cover of Life magazine in 1947 in Dior’s new creations which Dietrich had adopted into her own wardrobe. 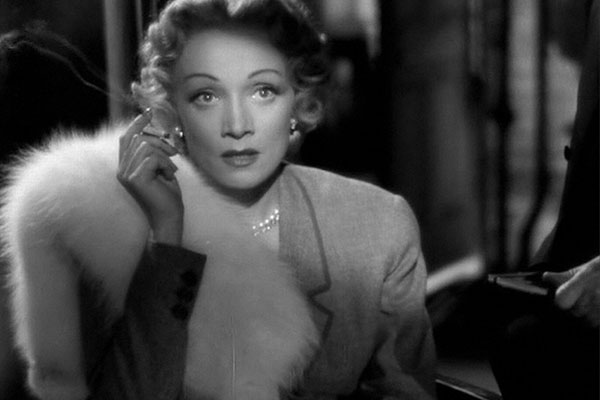 After years of starring in Josef von Sternberg’s sumptuously visual films and becoming an untouchable legend, Dietrich’s career was in decline. Her most redeeming work was her risky front-line entertainment of the allied troops during the Second World War, travelling the war zones of Europe accompanied by a semi-transparent Jean Louis beaded gown and her combat helmet, bringing, glamour and a reprieve from the horror of war to troops in Algeria, Italy, Britain, France and eventually Germany with General Patton, while having a high bounty on her head from Hitler for her betrayal of her motherland Germany. 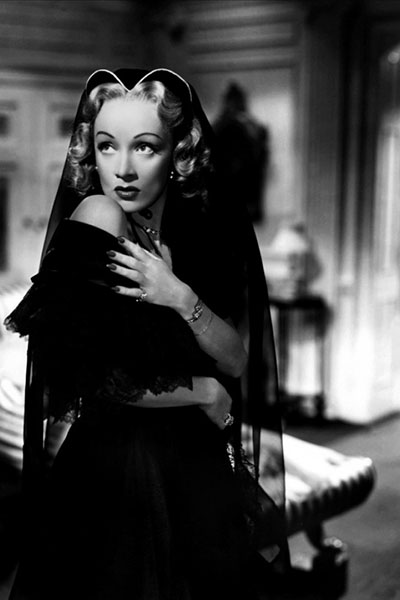 When Dietrich was asked to be in Alfred Hitchcock’s film Stage Fright in 1949 she agreed with the proviso that she could choose her own costume designer for the film rather then relying on studio costumer Milo Anderson who was doing the clothes of the star, Jane Wyman. She did not choose another costume designer, but chose the world’s most famous couturier, Christian Dior. 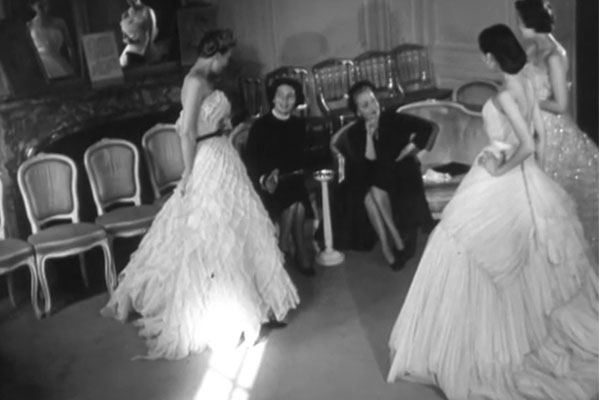 Knowing the value of publicity Dietrich’s arrival in Paris, via Trans World Airlines and her visit to the House of Dior where well covered by the still and movie cameras as was the fashion show put on for her alone to choose her production wardrobe. 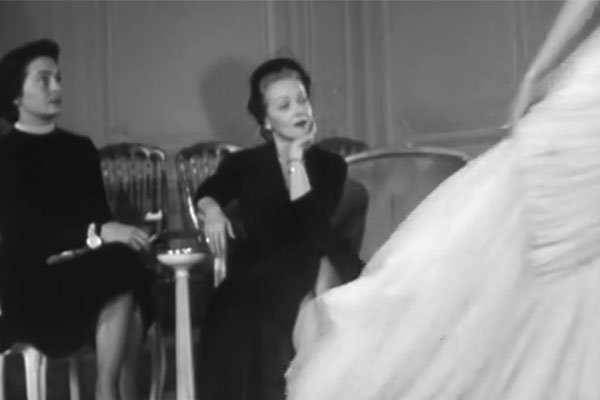 Working closely with the house, Dior and Dietrich created the sultry wardrobe seen in the film. She was notorious for being able to stand for 8 hours of fittings in a row to achieve faultlessness and the results show in the final film. 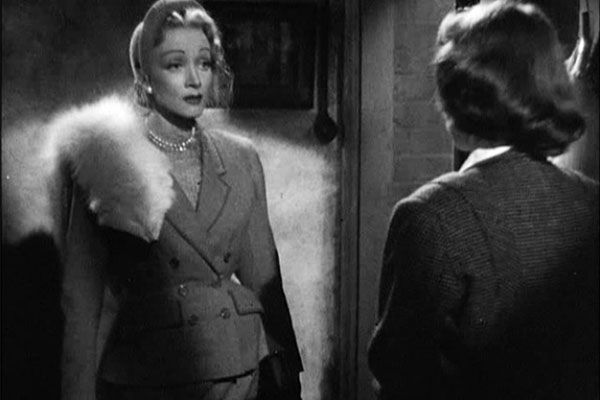 Stage Fright is a lost Hitchcock gem, always considered minor before the large commercial hit of Strangers on a Train the following year, it is actually a highly engaging film and you cannot take your eyes off the sleek Dietrich in any scene she is in, dripping of elegance in her Dior’s and unfortunately making star Jane Wyman, sixteen years her junior, look frumpy and unstylish. So obvious was the contrast that Wyman was in tears at the rushes, and continually fought to glamourize her character, to ill effect. 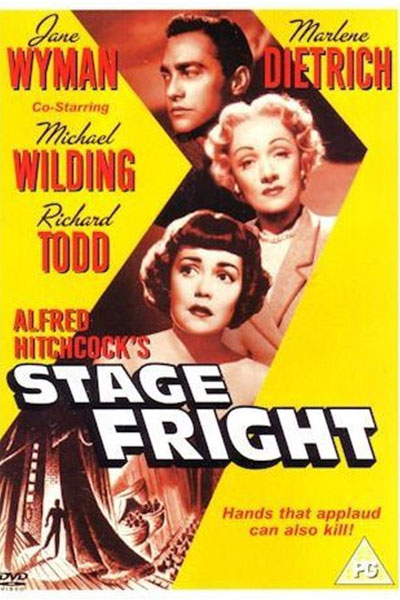 Taking Wyman under her wing, Dietrich taught Wyman the lighting she needed, how to have her makeup applied and how to sculpt her cheekbones with makeup and lighting and providing an all round Professor Higgins on the young Wyman. Dietrich learned from possibly the greatest lighting artist of them all, von Sternberg, how to light and sculpt herself to her sublime perfection. ‘Conturing’ was already an old game to Madame Dietrich in 1949.

Dietrich steals the film from her younger costars and the expected fireworks with Hitchcock, another control freak went unheeded as he basically left Dietrich to light herself and direct herself, and for the most part play herself, to great effect. She proudly touted his comments calling her an absolute professional, a professional wardrober, a professional lighting technician (she was the only actress who ever had a union lighting card so she could light herself) and a professional director. She failed to notice however that he did not refer to her as a professional actress.

Remembering what Christian Dior had done for her, Marlene returned the favour to the house when she filmed a cameo in 1964’s Paris When It Sizzles where she slowly slinks out of a white Rolls Royce in a white Dior confection and strides into the house at 30 Avenue Montaigne Paris – a perfect way to thank her maestro. 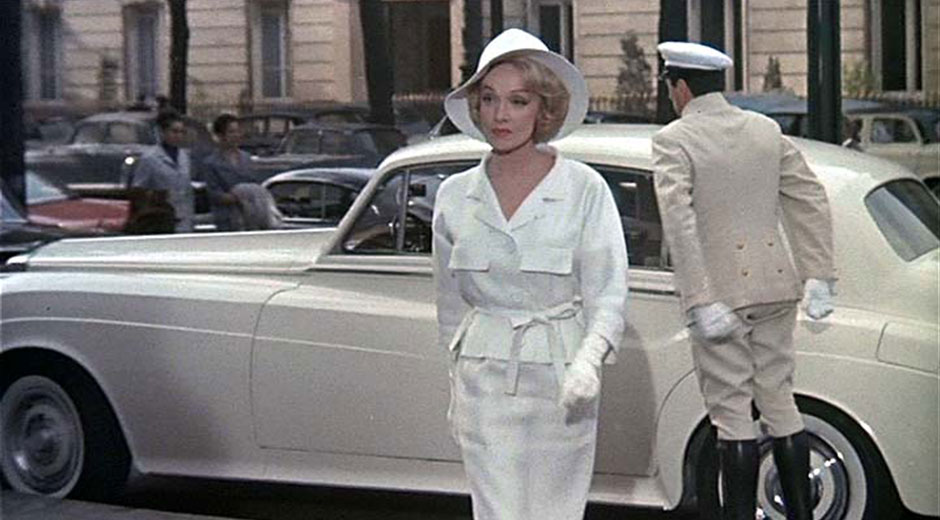